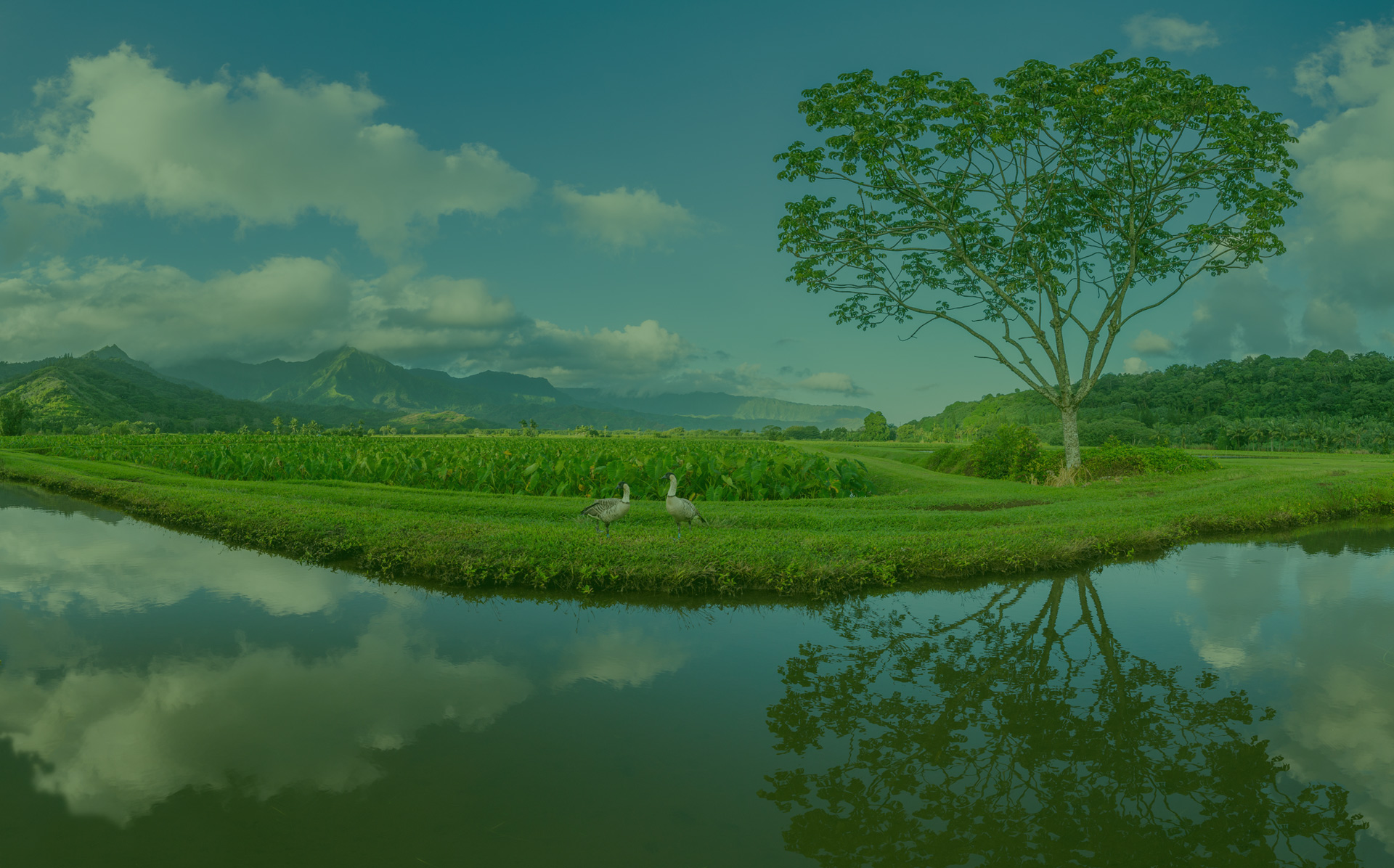 Imagine an island where basic needs like housing and access to a diversity of income generation opportunities are available for all.  Imagine a self-sufficient island with a farm to table food economy.  Imagine an island that represents a living model of our rich Hawaiian cultural heritage that honors both keiki and kupuna.  Imagine living within and experiencing the rewards of a sustainable island community, serving as a model for other island communities facing the same challenges as Kaua’i.

As it Stands Today

The reality is the last few decades of uncontrolled growth on Kaua’i have created intense pressure on our ecosystems, widened the gap of inequality, tipped the scales of balance in the quality of our personal and collective lives, and thus undermined the very foundation of a successful and fulfilled community.

In spite of the urgent need to reset our compass, an enormous disappointment and set back was endured by much of the Kaua’i Community early last week by the passing of the Draft General Plan by the Planning Commission that will guide the future of our island until 2035. For the past six months, the sentiment that has been echoed in chambers of the Planning Commission is that the communities of Kaua’i are looking for a sustainable future where growth is controlled and managed with the idea that quality of life for Kaua’i’s residents should be a priority. The hope was to re-align the balance of power on this island from one that places it’s priorities and future direction in the hands of the large land owners and developers, to one that puts quality of life for community members first. However, this was for naught as reflected in multiple decisions made in the final hours of the Planning Commission meeting on June 13, including accepting and forwarding to the County Council a proposed new General Plan. Fortunately, Commissioners Kanoe Ahuna and Donna Apisa had the good common sense to know that this Draft General Plan, in its current state, is not ready for prime time. However, these Commissioners did not represent the majority, and after seven meetings on the Draft General Plan the rest of the Commissioners were ready to move on fully knowing they held our future in their hands.

Shortcomings of the General Plan

The Draft General Plan, as it stands today, certainly does not reflect my nearly forty pages of input over the past year, and that same sentiment is almost unanimous amongst the many community members and community organizations who have been closely following this Draft General Plan and commenting along the way.  The Draft General Plan has no clear articulated vision (although the County will state otherwise), no real implementation plan or accountability (which are inseparable from one another), and no measures of whether we are actually making any progress in realizing the vision.

The Draft General Plan is built on a less than sound foundation, at best, as it is based on: misinformed and outdated data; poor to no rationale for why or how the Planning Department made specific critical decisions about land use; narratives that don’t match the land use maps; whole new categories of zones provided by developers that have no documented definition; changes in community designations that are not supported by the communities they apply to.  All of this and much more has been pointed out to the Planning Department, citing specific examples, page and paragraph numbers in the Draft General Plan, to no avail. Most of all, this is a Plan that does not even focus on putting out the smoldering fires created in the past, most of them identified in the 2000 General Plan and exasperated by the passing decades in which they have not been addressed. You surely recognize the symptoms of those smoldering fires as you sit in traffic in Kapa’a, pay a premium for the 80-90% of our imported groceries, or search for any available and affordable rental property. All the while this Plan accommodates building more visitor rooms, clogging our roadways with more cars and losing valuable agricultural lands to development, land that will never be regained. Please don’t take my word for it, I suggest you read the Draft General Plan and judge for yourself. In doing so you will also find a document that represents an enormous amount of hard work and consideration of the issues by Planning Department staff. In fact, they should be commended for their perseverance in plowing their way through seven sets of supplemental changes, while maintaining a spirit of collaboration with the community.

What Happened With the Public Process?

The Planning Department touts a solid public process. My observations tell me otherwise. I attended many of the Community Advisory Committee (CAC) meetings. These meetings were divided up by categories such as housing, transportation, etc. At times the data sets presented at these meetings were not clear, outdated and/or lumped together, not providing any substantive basis for making decisions. There was little to no dialogue, no time for the CAC members to ask questions, and only the usual 3 minutes allotted for public input. The Planning Commission meetings were conducted in a similar format.  Brief presentations on the substance of the General Plan, little to no dialogue (until the last 1 or 2 meetings), and 3 minute allowances for public input. In any case, what’s the rush all about? All at a cost of $1.2 million, surely we could have done better than this.

The influence of the Planning Department and its position was clear and quite frankly surprising throughout the Commission meetings. Situations like missing definitions on new zones (e.g., provisional agriculture) were made up during the Commission meeting, while the interpretation of the process for exercising “provisional” options in this zoning category were made up on the fly by the Planning Dept. without any documentation or precedent. You might ask – what is this all about? You might find that question is best referred to Alexander and Baldwin.

The community “place-typing” meeting I attended for Wailua-Kapa’a substantively followed a similar path. The format and effort warrant an applause, however, there seemed to be much missing in the details. And certainly this is reflected in a Draft General Plan that made a shift in Kapa’a’s growth “place-typing” category of “incremental” in version three of the Draft General Plan to “transformational” in version 4, with corresponding changes in the zoning plan for Kapa’a. Huh? Where did this come from? The Draft General Plan provided no supporting rationale for this change. Maybe we should ask the developers of Hokua Place where it came from as it certainly did not reflect the outcome of the community’s place-typing exercise.

Where Do We Go From Here?

We can all accept that change is inevitable in regard to the future state of our island. However, change does not need to occur in absence of the intention or determination by our Kaua’i community. We are a small, isolated island in the middle of the Pacific and with each decision we make (or don’t make) our options for making choices for our future are becoming increasingly limited. We also recognize that although we live in an interconnected and interdependent world, that having island self-determination and self-sufficiency is the ideal. The era of “sustainability” as merely a concept has passed. We have entered into a new and urgent reality whereby a sustainable Kaua’i model is imperative and must provide a fundamental framework for how we conduct our lives.

If the County is not willing to take it on, then we as an island community can and have to work collectively, quickly and effectively to meet these challenges. We have no other choice. The time has come to sharpen the focus on where we want to be and widen our problem-solving lens by harnessing the collective intelligence that resides within this island community. Problems, by definition, have many facets to them and by using collaborative engagement we can tackle these complex and systemic challenges and help shape a future for Kaua’i that is forward thinking, based on a proactive rather than reactive model.

With the best of intentions, individuals and community organizations have sought to work in collaboration with the County. An enormous amount of personal and community time and resources have been committed to this end over the last year and a half. What we are now left with is to work with each other. That’s the only way we are going to realize the future we want.

For twenty years Anne Walton worked as a coastal and marine resource planner for NOAA. For the last twelve of those years she trained communities and professionals in 32 countries how to use place-based models, tools and processes for developing management plans, marine spatial plans and climate adaptation plans.

Click here to view an archive of emails sent to CCK subscribers.